I was invited by the lovely Bill Arning to give a poetry reading at the Flatland gallery tonight, but of course that has been postponed as we all virally die and the world ends. But I thought I might as well record the long poem I was intending to read anyway, as we’ve all gone virtual as it is.

I’ll be reading the poem Catfish, from my poetry book Catfish and After, Brighten Press. 2019. I began it when I was in the throes of falling in love with a gorgeous, smart, funny, deaf architect on the chat app Grindr. We had been chatting for a month non-stop daily, diving deep into one another, telling stories of our lives and sharing our hopes and terrors and depressions, connecting on a level I hadn’t experienced in nearly a decade. His pictures were sexy and stunning, with his deafness explaining his introversion and unwillingness to meet right away. It also seemed to explain his reluctance to tell me his last name or phone number.

But as I invested more in him emotionally over the coming weeks, it set off all kinds of alarms that I couldn’t find any trace of his existence online. The red flags flapped, but he was so consistent in his stories and personality that I couldn’t imagine he wasn’t who he said he was. I’m an insightful storyteller, with a powerful bullshit detector. I couldn’t possibly be deceived to such an extent. As I panicked and churned with emotion, I began to write about it, and the raw material for this poem spilled out over the coming weeks.

After I learned the truth, after I recovered, after I wrote the poetry cycle After, I cut and honed this cyberfraud material to pare it down to the poem I’m going to read right now.
This is Catfish, from Catfish and After, by Gene Hult.

Available in paperback and Kindle editions at brightenpress.com. 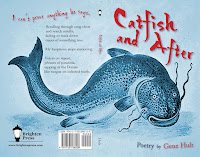 Catfish and After -- paperback copies!