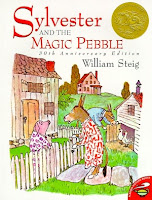 One of my favorite books of all time is Sylvester and the Magic Pebble by William Steig.  It was published in 1969, and won the Caldecott Medal in 1970.  I was born late in 1969, and I don't remember the first time I was read this book, so my mother must've gotten it pretty early on.  I still read it regularly, and it's become my standard favorite children's picture book, up there with Maurice Sendak's Where the Wild Things Are and Shel Silverstein's The Giving Tree.

Sylvester and the Magic Pebble is a frightening, magical story about a young donkey named Sylvester who likes collecting unusual pebbles.  One day, while out walking alone on a rainy day, he finds a shiny red pebble, and while holding it, offhandedly wishes the rain would stop.  The rain CEASES, and after a few tests, Sylvester realizes that the pebble grants wishes as long as he is holding it. 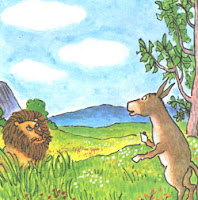 Thrilled about his discovery, Sylvester heads home with big plans for the pebble's magic, but on the way, he is spotted by a hungry lion.  In panic, Sylvester doesn't think clearly, and to protect himself, wishes that he was a rock.  And so he turns into a rock, safe from the lion, but with the pebble lying beside him, not quite touching him, Sylvester can't turn himself back into a donkey.

So Sylvester is stuck as a rock, unable to get home to his loving parents, unable to do anything but lie there and wait, powerless. That's the stuff of childhood nightmares -- being separated from home, transformed into something unrecognizable and immobile, with all the power in the universe lying right beside you but unreachable.  By acting quickly without thinking, Sylvester traded one danger for something even worse. 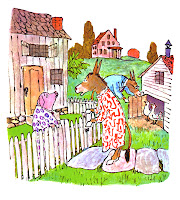 I always found the worry on his parents' faces so touching as they start searching for him. It's wrenching how they slip into despair as Sylvester is nowhere to be found, even after asking all the kids in the neighborhood, the police, and sniffing dogs to search him out. And all the time, Sylvester is just less than a mile away, unable to return home. It hits home with every child how sad his parents felt.  As Steig writes, "They were miserable. Life had no meaning for them any more."

The seasons pass, and Sylvester slips into the ennui of being a rock, sleeping so he won't feel "hopeless and unhappy".  There's one snowy winter scene in which a wolf sits on the Sylvester-rock and "howled and howled because he was hungry."  I always loved that so much -- the wolf crying out in hunger mirroring Sylvester's endless desire to return home. The illustration is white and cold, and just heartbreaking.

Finally, in Spring, Sylvester's parents go have a sad picnic, and through sheer coincidence, set up their umbrella and basket next to the Sylvester-rock, and eat right on top of him.  They talk about him, but he can't respond, which is maddening. His mother even has a feeling that he is near.  His father finds the red magic pebble, and puts it on top of the rock, saying how much Sylvester would have loved it for his collection. 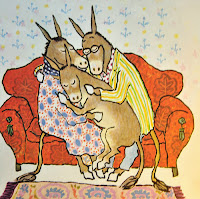 Sylvester wishes he was "my real self again" and presto!, he returns to being a donkey.  They rejoice in surprise, which will still reduce me to tears on occasion.  Then they go home together, and have no need to use the pebble's magic, because, "for now, what more could they wish for? They all had all that they wanted."

In simple, direct language, Steig weaves a emotional, psychologically and philosophically complex tale that has never stopped resonating with me and millions of others.  The story is deeply sad and quite terrifying, really, but the drawings have lots of humor, too, like the ducks in the river looking up in surprise when Sylvester wishes the rain away, the consternation on the face of the lion when Sylvester turns into a rock, and the dishes falling off Sylvester's back when he transforms back into a donkey. 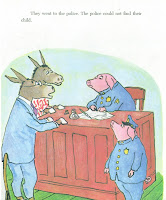 Even as a child, I also knew it was funny that the police in town were drawn as pigs, but that's also caused the book to be banned in various places. Whatever -- it's a tiny subversive touch that only makes me love the book even more. 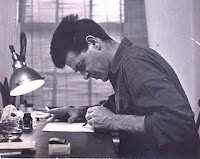 I've loved William Steig as a New Yorker cartoonist, too, and I've enjoyed some of his other picture books, but nothing comes close to the pure emotional wallop Sylvester and the Magic Pebble delivers with its short, delightfully illustrated story.  Yes, Steig also wrote the book Shrek!, which the popular DreamWorks movies were based on, but for me, Sylvester's story is the one that really hits home.

It's a perfect children's book, and will always be one of my all-time favorites.

Catfish and After -- paperback copies!